The mystery of the Air Jordan 35 has unfolded rapidly since it first appeared by way of official images. And with wear testing underway as confirmed by Jayson Tatum and Jeff Green, it’s likely we’re soon to see the silhouette’s official release before the end of the year.

Alongside vibrant, iridescent accents and a number of versatile neutrals, the pair also seems to be making use of heritage palettes as recent leaks confirm a classic white, black, and red colorway. A loose homage to Chicago, the pair leads first with its two neutrals — the black dyeing the nubuck counter, eye stay, toe cap, and tongue while the white adheres to the cage along the profile as well as the mesh collar and grid overlaid instep. This two-toned arrangement is then mirrored on the diamond-patterned laces, the strings wrapped adjacent to red typography, Jumpman insignia, and matching secondary notes.

Grab a quick look at this upcoming AJ35 right here and sit tight as we await its Nike.com release.

In other news, take a look at the Peyton Smith designed Air Jordan 4 Make-A-Wish. 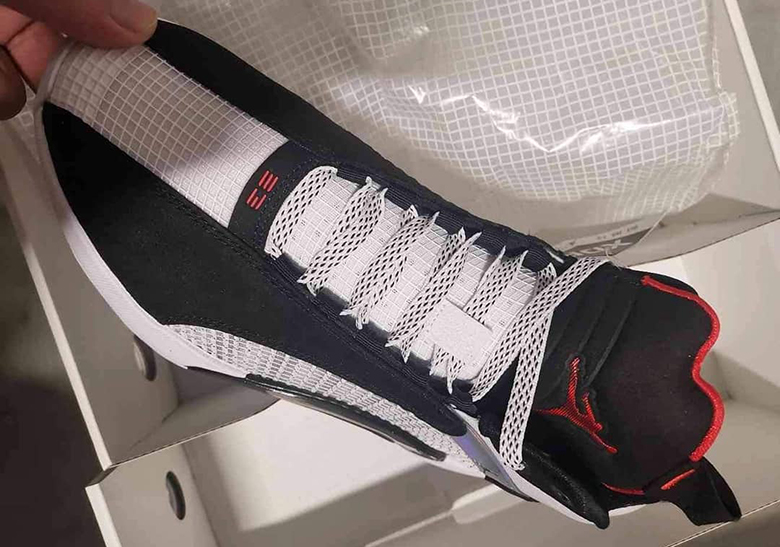 Nike’s interest in trail running has turned from side hobby to full-fledged passion in recent years. The brand, both through the ISPA line-up as well as their existing runners, has continued to expand an already large roster, and now, we’re soon to see a Dark Sulfur follow-up to the Summer’s Pegasus Trail 2. Alongside the...

Nike Sportswear has (arguably) been unrivaled in regards to transitioning footwear from performance to lifestyle wear. It’s best example is unquestionably the Air Force 1, which is gearing up for the upcoming fall and winter with the help of GORE-TEX. While not new to the model’s tallest height, the waterproof material is now accompanied by...

After serving as one of Nike’s most prolific silhouettes in the year 2019 with a bevy of GR colorways, college-themed makeups, and a Kendrick Lamar collaboration, the React Element 55 has significantly slowed down its production in the new year. Known to make more occasional appearances now, the silhouette is...

Given that it has been pretty active in terms of its partnerships with the likes of Maison Margiela, Chromat, and the animated Minions as of late, the Reebok Instapump Fury OG is taking a minute to focus on its in-line family to introduce a new installment. For its theme, it’s...

Nike’s long-running homage to ACG takes further shape after a brief time away, the brand now using the Air Max 95 SE as its canvas for experimental materials and a color palette that, while muted, is imbued with the same All Conditions Gear ethos. Though bereft of the signature ACG...